The Mountain People of Northern Luzon

Cordillera, a name given by the Spanish Conquistadors when they first saw the mountain ranges. Meaning “knotted rope”, the Spanish term refers to the jumbled rolls and dips of this long-range traversing the northern part of Luzon Island. Today, if one is to generalize one of the six ethno-linguistic tribes as an “Igorot” is considered degrading.

Living amidst the rice terraces that tower over Northern Luzon are a people whose way of life existed long before any Spaniard or other foreigners stepped foot on the Philippines. The Bontoc, Ifugao, Benguet, Apayao, and the Kalinga tribes reign over Luzon’s mountain terrain. They are people with a complex system of beliefs, living simple lives to appease their gods. Their rituals celebrate their daily lives – a good harvest, health, peace, war, and other symbols of living. Such traditions have survived the changing scope of the Philippines and the tribes continue to maintain their cultures that are a part of the colourful cultural fabric known as Philippine culture.

The mountainous Central Cordillera region of Northern Luzon hold common religious beliefs, generally nature-related, and make propitiatory offerings to anitos, or household gods. For the people of the Cordillera, dance continues to be an expression of community life that animates the various rituals and ceremonies. They dance to appease their ancestors and gods to cure ailments, to ensure success at war, or to ward off bad luck or natural calamities. They also dance to ensure bountiful harvests, favourable weather, and to mark milestones in the cycle of life. 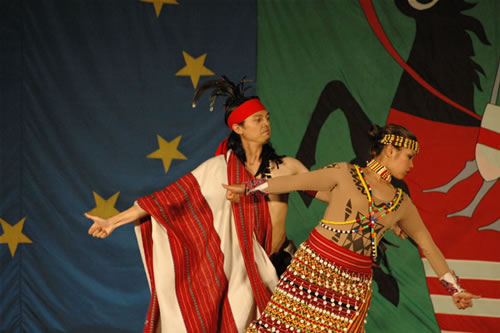 The Salip of the Kalinga tribe depicts a warrior claiming his bride by presenting her with a matrimonial blanket. She follows the man to connote obedience. 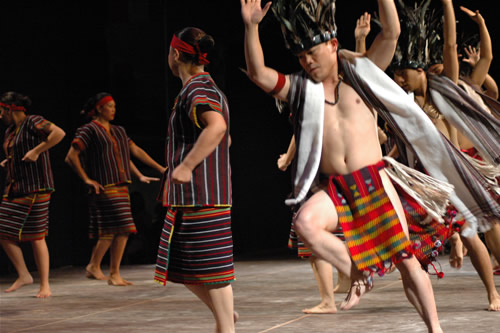 This is an Ifugao wedding festival dance accompanied by gongs and is performed by the affluent to attain the second level of the wealthy class.